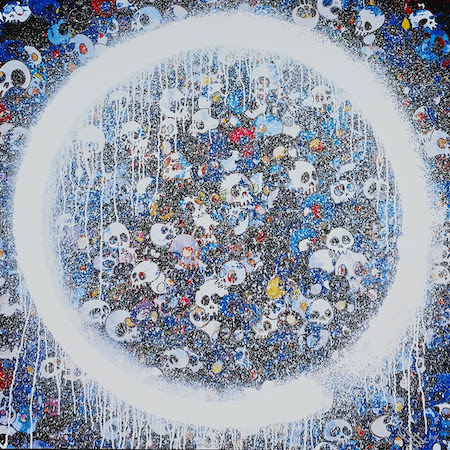 When I manage to snatch the tail of an idea, I must then transport a fragment of it to a completely different region of my brain . . . Once a deadline is met, that region can relax, so I graft the new idea onto that relaxed region in order to nurture and grow it. This is the process I endlessly repeat, and as such, I can never see the end of it; each day of unease is followed by another, and only for a moment when a project is complete do, I get to experience a modicum of liberation. As a distant result of such a thankless, humorless repetition, interesting works get made.
—Takashi Murakami 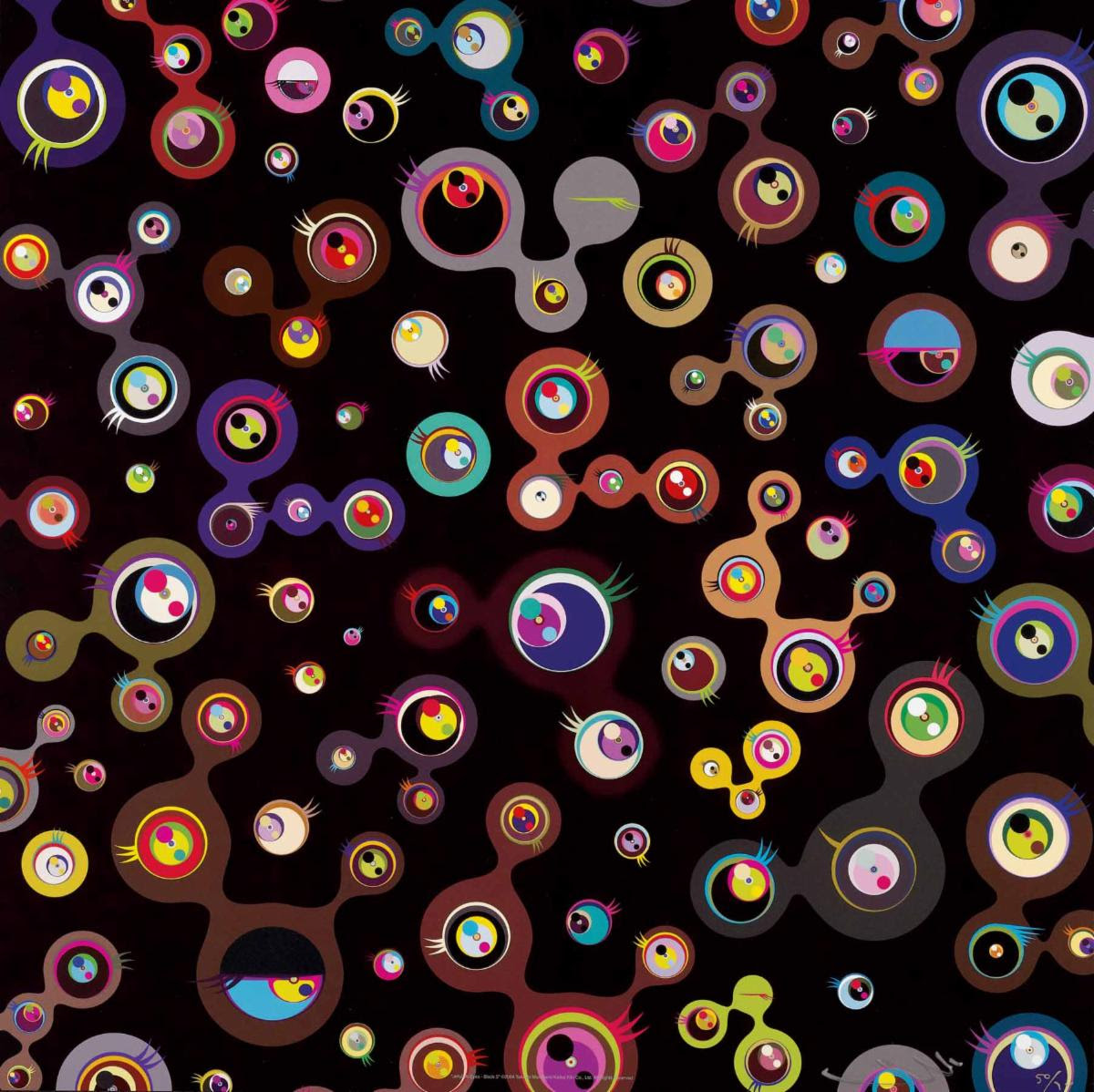 Takashi Murakami’s colorful paintings reveal the consistent, universal themes that have guided the artist’s work. Each work of art reflects his craft and insightful engagement with popular culture, folklore, and pop art style, all mixed with traditional Japanese culture. One of today’s most imaginative artists, Murakami is universally recognized for both his fine art and commercial output — including collaborations with hip-hop stars Kanye West and Pharrell Williams, as well as designs for the fashion and beauty industry with Louis Vuitton, Issey Miyake, and Shu Uemura. 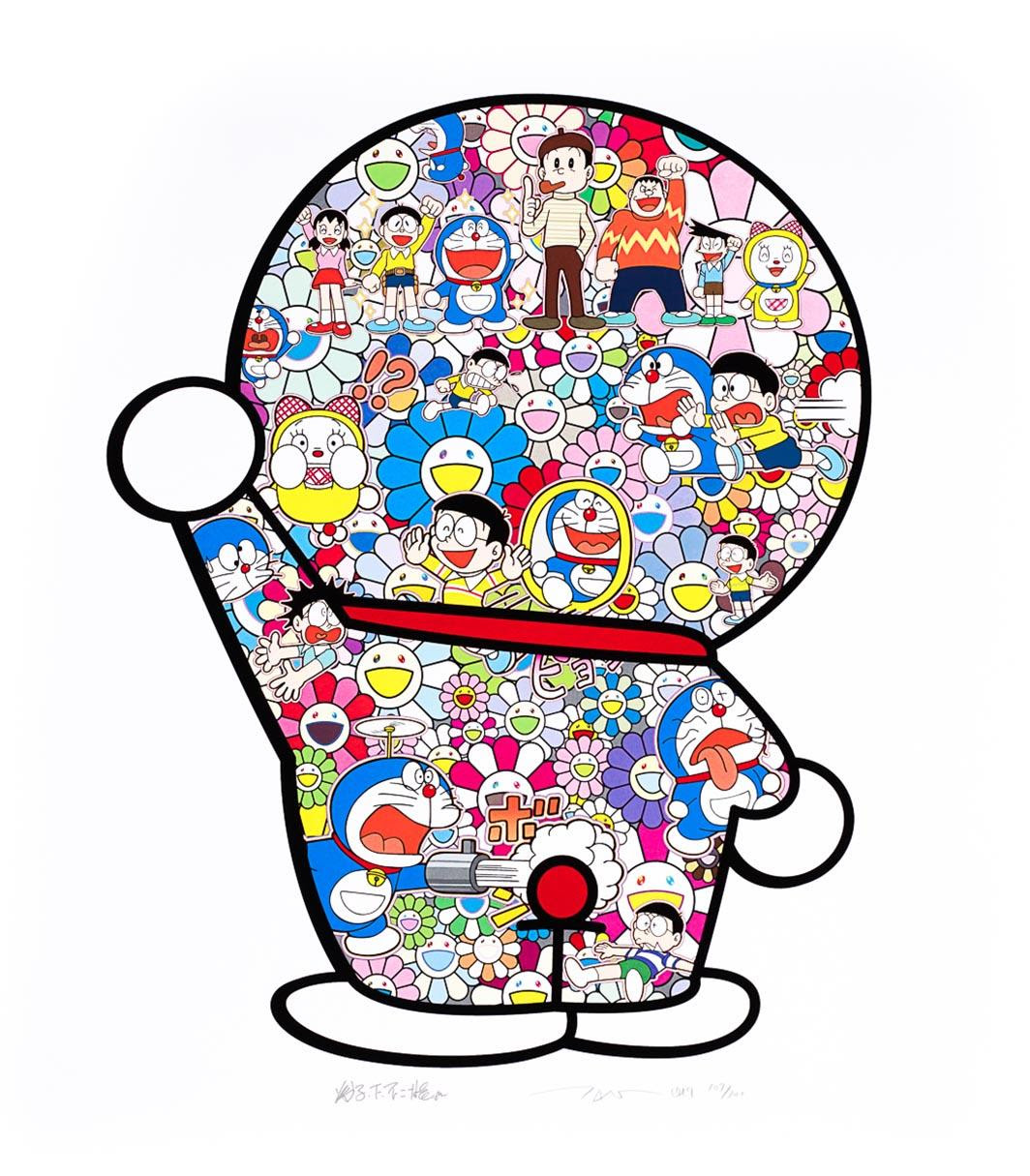 Murakami was influenced by animated films (anime), comic books (manga), and global branding, and creates and adapts his recognizable characters into a style that he has dubbed “Superflat”-a tribute to the two-dimension style of classic Japanese cartoons. The theory posits that there is a legacy of flat, 2-dimensional imagery from Japanese Art history in manga and anime.

In 2002 and 2017 in Japan, Murakami participated in The Doraemon Exhibitions, group shows of contemporary artworks inspired by the famous manga character, a time-traveling catlike robot who befriends a young boy named Nobita Nobi. Mr. Fujio and Doraemon are in the Field of Flowers is included in the exhibition. New paintings depicting Mr. Fujio and Doraemon waving in front of the Anywhere Door, a device that allows its user to teleport and surrounded by multicolored smiling flowers. Granting entry through We Came to the Field of Flowers Through Anywhere Door Anywhere Door, Doraemon and Nobita are whimsical parallels to a pair of mythical animals that often guard the entrances of Buddhist temples.

With the Enso paintings, Memento Mori Red on Blue, Murakami moreover harks back to Japanese tradition. As a motif, the Enso (literally “circle”) symbolizes emptiness, unity, and infinity in Zen Buddhism.

Murakami’s “eye” motif – Jellyfish Eyes – Black 5 ranks with DOB, flowers, and mushrooms as one his most repeated. In Japanese mythology, there is a character known as “Hyakume” (Hundred Eyes), who is a guardian of shrines. Hyakume only comes out at night because the sun is too bright for him. Like the otoroshi, he guards sanctuaries against thieves. When he met a thief, one of his eyes would leave his body and endlessly pursue the thief until it made contact and branded the transgressor. After that, the thief always had the eye as a mark that he was a thief. Variation after variation of “superflat” cartoon eyes, separated from their living bodies (or from Hyakume?) parade through Murakami’s art, perhaps continually assessing the viewer as “thief” or “not-thief”?

Born and raised in Tokyo, Japan, Takashi Murakami attended the Tokyo University of Arts, where he acquired the drafting skills necessary to become an animator, but eventually majored in Nihonga, the ‘traditional style of Japanese painting that incorporates traditional artistic conventions, techniques, and subjects. In 1994, Murakami received a fellowship from the Asian Cultural Council and spent a year in the PS1 International Studio Program in New York City. During his stay, he was exposed to and highly inspired by Western contemporary artists and the art movement of Simulationism, which engages in a play of relationships between cells, icons, and the increasing geometricization of the social space in the world in which we live.

“I am not a political artist, and my target is children, I found my market, my sweet spot, Okay, this is my zone — for the kids “-, Takashi Murakami. 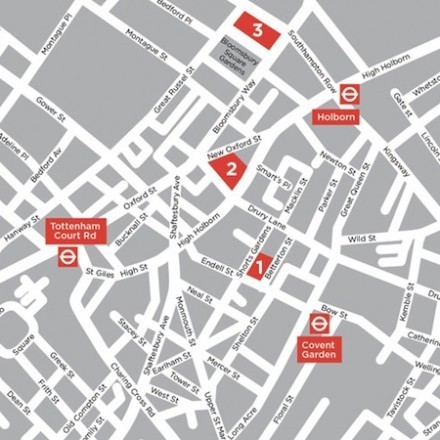 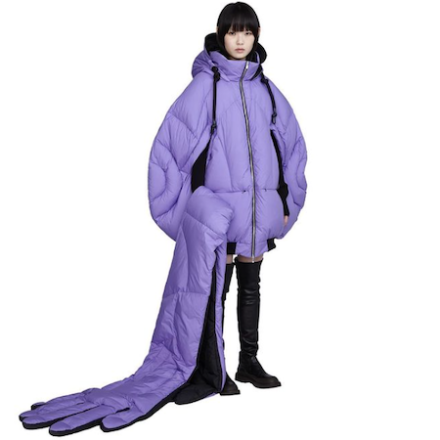 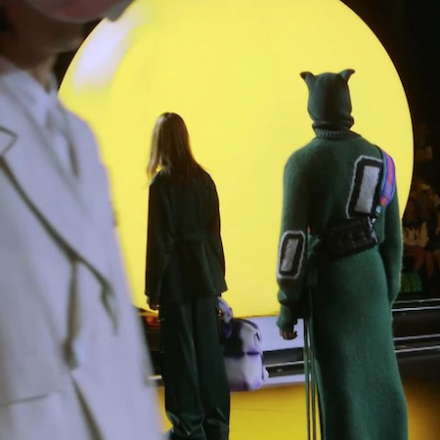 After its runway debut in Paris in January, the Louis Dreamhouse™️ lands in Bangkok with the Men’s Fall-Winter 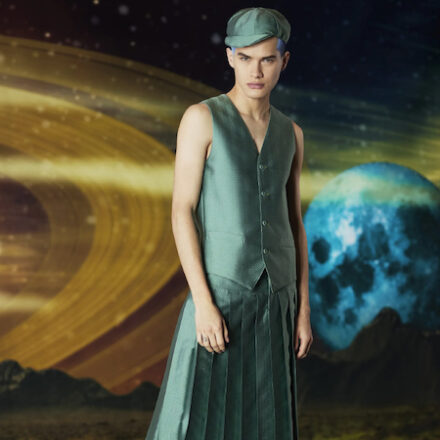 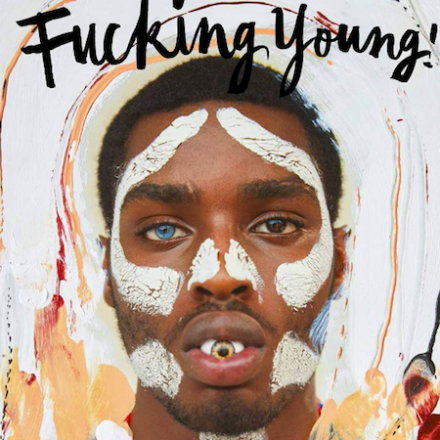